They say the strength of the chain is in the weakest link. This adage can be applied to, say, data flow management in a connected car ecosystem. The data generated by the car’s telematics system and the mobile device is transmitted through a network and stored in a server. On top of this “pipe” is middleware and a firewall protecting the data shared between corporates, consumers, telecom operators and dealerships. If this ecosystem does not maintain a continuous flow and, if any latency in the software sets in, it may be catastrophic for the company — a system failure can send its fortunes reeling. Hence, the need for experts to avert a situation of this sort. Such an expert is the Bangalore-based startup, Avekshaa. 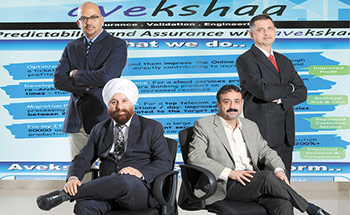 The company checks IT systems of big companies for bugs in the code and gets the pieces ready for integration. Once the pieces are placed together, Avekshaa’s engineers make doubly sure that all components of the software work in unison. “Failure in information technology (IT) systems impacts customer service and eventually damages corporate reputation,” says Rajinder Gandotra, one of Avekshaa’s founding partners.

The assurance space in which Avekshaa operates is a lucrative one. Research firm Butler Group says companies lose $73 billion each year due to bugs and scalability issues in their software. The market size for firms in this space is $8.5 billion and it is growing at 20 per cent year-on-year.

"Traditional IT business services are commoditised and no longer hold the edge in serving complex business practices," says V. Balakrishnan, former Infosys chief financial officer and now, founder of Xfinity Ventures. Considering that IT services firms are grappling with automation and also with employing more people to test complex IT practices, he believes the platform offered by Avekshaa could change the way assurance businesses operate.

Avekshaa was started in 2010 by Ashutosh Shinde, Arun Ramu, Gandotra — all former employees of Infosys — and Ramnik Singh, with a novel business pitch. They went to the big banks and convinced them that Avekshaa could provide assurance, security and scalability of IT infrastructure on an automated platform and also give them (banks) a second opinion of the work already executed by the bank’s IT vendor.

Of course, the fact that the four partners were former executives in large technology companies, where they had won and managed business lines worth $1.5 billion, helped, when they started Avekshaa. "We build computational techniques that automate the migration of core applications and this sets us apart from other companies," says Shinde.

In a particular case, when IndusInd Bank changed its core banking solution across its 461 branches and 852 ATMs, Avekshaa made sure the system did not suffer on the performance front. The system went live in a single day and issues across the technology stack were identified and mitigated well in advance. "With the transformation, the technology allowed significant growth in terms of client base and physical branch network," says Paul Abraham, chief operating officer of IndusInd Bank.

They (Avekshaa) helped us improve response time, which will ultimately improve customer experience with the bank," says Sanjay Jaiswal, vice-president, IT, of IndusInd Bank.

Axis Bank too, has employed Avekshaa's services. "They delivered results by improving efficiency and reliability of critical applications," says R.V.S. Sridhar, president, IT and retail banking operations, at Axis Bank.

Avekshaa is testimony to the fact that highly-paid successful executives can move out and make their ideas work. They seem to have read the story right because according to analysts, 50 per cent of Indian corporates will go digital by 2020 and would need assurance companies to help scale their IT systems.

To Avekshaa's credit, it is vendor-agnostic and can ease the pain points of a firm’s products by testing them in a multi-vendor scenario. "Indian entrepreneurs have been successful in building business-to-business services. Startups that provide flexibility, with automation, will be the ones to work with large companies," says Sanchit Vir Gogia, CEO of consulting firm Greyhound Research.

Balakrishnan has invested Rs 25 lakh in Avekshaa as a pre-seed fund. It also raised $500,000 from KITVEN, the venture fund started by the Karnataka government. "We invested in this company because it had big banks as its customers and was solving a critical aspect of the client’s business," says Manish Kumar of Karnataka Information Technology Venture Capital Fund.

While IT businesses across the world are getting commoditised, profit margins are getting thinner. To survive and maintain margins, companies must innovate. Analysts say automation can contribute to 33 per cent of net margins. "Software integrators are only looking at their end and not at the whole technology sphere in a corporation," says Shinde. "In an ever converging world of IT systems, and the cloud, you cannot ignore the working of the entire pipe."

Avekshaa has executed 250 projects for 18 clients — 16 in India and two overseas. Of course, a corporate firm is bound to work well with a team whose combined work experience is 75 years, and hence can do good business in India. But Avekshaa with its four partners hopes to build a global business in a short time and become a corporate itself.